To date on this blog, we've discussed reading for pleasure and buying for collectibility. We haven't yet talked about writing as a means of bringing about social change, though it is an accomplishment that many authors have achieved. Harriet Beecher Stowe's 1852 novel Uncle Tom's Cabin strengthened anti-slavery sentiment and probably helped bring about the Civil War, while Upton Sinclair's 1906 book The Jungle led lawmakers to pass the Meat Inspection Act and the Pure Food and Drug Act of 1906. In the same vein, Rachel Carson's book Silent Spring is said to be the impetus for the environmental movement. 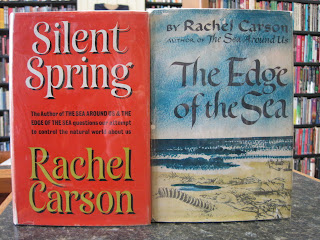 Originally serialized in The New Yorker, Silent Spring (1962) discusses the devastating effect of pesticides, particularly DDT, on the natural world. Unlike previous pesticides, which targeted only one or two insect species, DDT wiped out all of them. At first, the pesticide seemed like a miracle cure. In World War II, it was sprayed to kill typhus-carrying insects and the disease was almost eliminated in Europe as a result. DDT was also used to destroy pests like malaria-causing mosquitoes in the South Pacific.


But Carson noticed that DDT was not just killing off large numbers of insects--it was killing off bird populations, as well. When DDT enters the food chain, it builds up in the fatty tissues of animals and people, causing cancer and other genetic defects. Scientists later discovered that DDT makes the eggshells of birds thinner, which means that eggs cannot withstand the weight of brooding adults--and frequently break before they have a chance to hatch. DDT also causes sterility in adult birds and was one of the main reasons that bald eagles nearly went extinct in the 1950s. Once the chemical was banned in 1972, the bald-eagle population rallied.


Although John F. Kennedy's Science Advisory Committee validated Carson's claims, critics dismissed her findings. Some even suggested that the accredited biologist was nothing more than a hysterical woman. Although she did not live to see the establishment of the Environmental Protection Agency in 1970, her groundbreaking book was pivotal in its creation.


Here at Babbitt's Boosk, we have two excellent vintage hardcovers by Carson. One is the first printing of the first UK edition of Silent Spring, published by London's Hamish Hamilton in 1963. The book's brown-tweed exterior is in almost pristine condition and the interior is clean. It comes with its original dust jacket. At only $20, it's quite the steal. 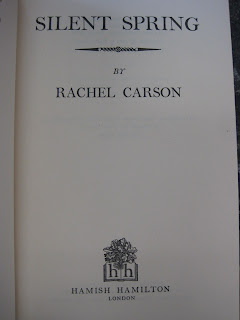 The second is The Edge of the Sea, which is the third book in Carson's so-called "sea trilogy." (The first is Under the Sea Wind and the second is The Sea Around Us.) All three books are about marine biology and the ecosystem, and classics in the canon of nature writing. The dust jacket blurb reads:


"The variety of shore life is rich and complex; its patterns go back half a billion years, when the ancestors of our sponges and jellyfish, snails and crabs flourished in the Cambrian seas. The same great forces are still at work: the tides in their eternal rhythms, the waves, the ocean currents. In this book we see how these forces shape the living creatures that depend on them. And so a mysterious universe becomes intelligible, though the essential mystery remains." 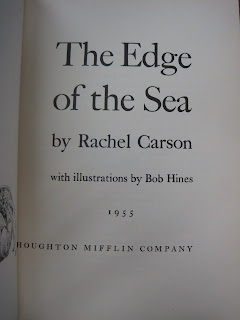 Our copy is a first printing of the first edition, published by Houghton Mifflin Company in 1955. The book is in clean, readable condition and comes with the original dust jacket. Priced at only $8, it's also a steal. 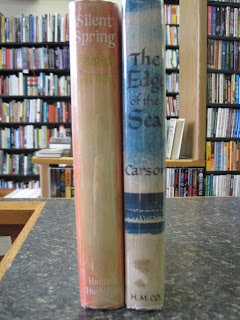