It's a steady Saturday here at the bookstore and since I can't stray too far from the register, I'm using the down-time to whittle away at the pile of books waiting to go online. (In case you're not familiar with our system, most books at an eight-dollar price-point or above are cataloged so that they can be sold online as well as in the store.) In one of the piles I unearthed quite an interesting catalog from 1941.


The product is "sold under the fairest plan and easiest terms ever offered." There is a "30 Days Trial" and the buyer has "4 Months to Pay."


Can you guess what it is? 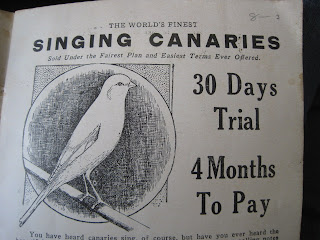 The canaries are sold* by Roderick Bird House of South Bend, IN and come in such varieties as Yankee warblers, American singers, gypsy serenaders and Manhattan serenaders. There are Seifert Roller canaries, Glucke canaries, white canaries. An English Norwich canary is "half the size of an ordinary canary" and "can be furnished in yellow or mottled," while the English Yorkshire "stands very erect" but does not sing as frequently as other canaries. The Dutch frill is a "large bird with a fairly good song" with a plumage that "consists of curls and frills."


The two-page, step-by-step canary breeding section is particularly amusing because of two, solitary sentences--in all caps--in the body of the text. (Evidently the most important instructions to heed when mating your pets.) DON'T LET PEOPLE STAND OVER THE CAGE AND WATCH THEM, one sentence says. DO NOT EXPECT YOUR MALE BIRD TO SING WHILE IN THE BREEDING CAGE, warns the other.


Canaries aren't the only bird offered, though. The catalog has a big boast to make about cousin cockatiel. 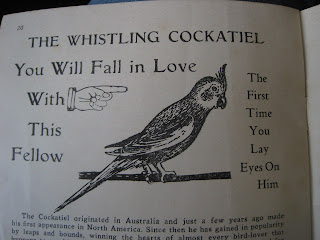 There's even a coupon inside titled FREE BIRDS FOR YOU! Each male canary ordered from page 4 or 5 of the catalog comes with a complimentary female companion of the same breed.


So what do you say? We can't give you a free canary, but we can sell you an incredible catalog for $8.

*well, were sold. I imagine this business is long defunct.
Posted by Babbitt's Books at 2:26 PM 2 comments:

A fellow of infinite jest, of most excellent fancy.

Babbitt's Books is excited to announce the first-ever event in our "new" location, an April 15th reading to mark the release of David Foster Wallace's unfinished novel and last major work, The Pale King. (We say "new" because we're coming up on our four-year anniversary in the Beaufort Street space.) Set in Peoria, IL, The Pale King explores the boring and tedious life of an I.R.S. worker, David Wallace. The book reads like a memoir and--well--may actually be part memoir, as Wallace claims in the preface that he once took a year off of college to work at the I.R.S. You can read more detailed reviews at The New York Times and Esquire.

David Foster Wallace taught English literature and creative writing at ISU from roughly 1992 to 2002, and has countless ties to Central Illinois. He finished his magnum opus Infinite Jest while living in Normal. Actually, Babbitt's Books used to host regular readings, and David Foster Wallace was a presence at many of them.

At this reading, we will remember him as a patron, a person and most of all as a friend. Fans and friends of Wallace will read selections from The Pale King and his previous works. The reading begins at 7:30 p.m. and is free and open to the public. Copies of The Pale King and Infinite Jest will be available for purchase. Babbitt's Books will provide complimentary beverages and refreshments.

For more details, please check us out on the web at https://www.facebook.com/babbittsbooks (Go to 'Events' on the left-hand side of the page) If you are interested in reading you can e-mail us at sales@babbittsbooks dot com. Selections are your choice and should be 10 to 15 minutes in length.

We hope to see you there. 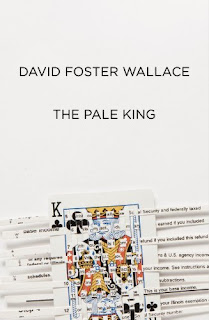 Posted by Babbitt's Books at 9:49 PM No comments: