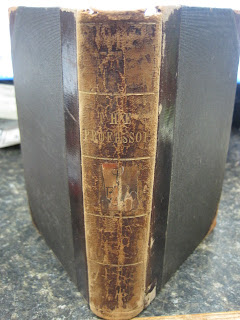 Currer who, you say?


Up until recently (say the last century or so), published women were scarce. When women did manage to get published under their Christian names they were expected, according to Charlotte Brontë, to adopt a "mode of writing and thinking . . . called 'feminine' ." Deviating from the expected norm might cause "authoresses . . . to be looked on with prejudice." Brontë notes that she and her sisters Anne and Emily "had noticed how critics sometimes use for their chastisement the weapon of personality, and for their reward, a flattery, which is not true praise." Women who wanted to tackle heavier, riskier material, or women who just wanted to write honestly, were usually out of luck. To circumvent this problem, many Victorian women, like George Eliot and George Sand,  or Michael Field (an aunt and niece combo!) resorted to writing under male pseudonyms. 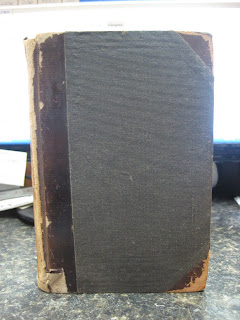 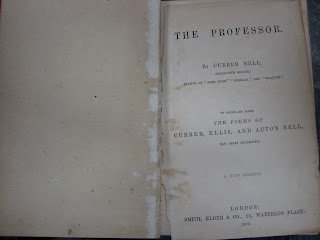 The Professor was written before Vilette and Jane Eyre, but not published until after Brontë's death in 1855. Villete is basically a reworking of The Professor, with a woman's point of view. Still, it would be something to give this book to an enthusiastic Brontë fan this Christmas, to watch the initial puzzlement, then the delight as you revealed the true nature of this treasure. Maybe pairing a $4 copy of Jane Eyre with The Professor would be a nice hint. 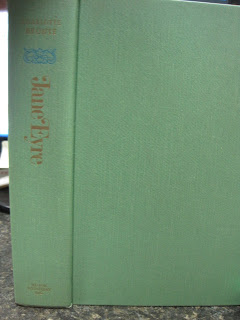 . . . two nice James Merrill collections, one of poetry, one of novels and plays. 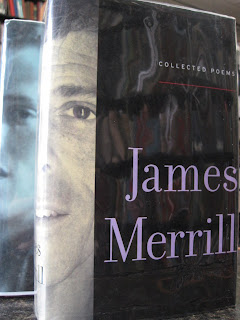 Merrill's poetry is split into two different bodies: the first, emotional lyric poetry; the second, occult-themed verse, as explored in The Changing Light at Sandover. The blurb on the dust jacket flap of Collected Poems calls him "one of the supreme love poets of the twentieth century."


"Orchards, we linger here because
Women we love stand propped in your green prisons,
Obedient to such justly bending laws
Each one longs to take root,
Lives to confess whatever seasons's
Pride of blossom or endeavor's fruit
May to her rustling boughs have risen."


--"Upon a Second Marriage"


Collection Poems spans his earliest poems to A Scattering of Salts, the last volume of poetry published before his death from complications of AIDS in 1995. Collected Novels and Plays is just what it says. 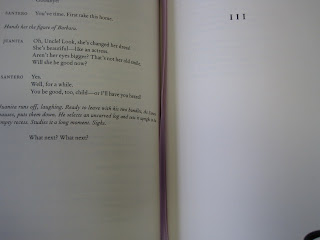 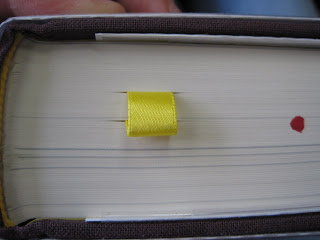 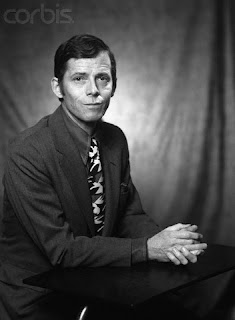 Posted by Babbitt's Books at 12:07 PM No comments:

. . . a nice collection of Matisse books, which is the closest we can come to giving you an actual Matisse painting.


We thought the art fans out there might be feeling under-appreciated, and since we have such good (affordable!) Matisse books, he's the perfect springboard to talk about the spectacular art section at Babbitt's Books.


The drawback of buying art books new--especially ones that are coffee-table books--is that they get expensive fast. It's hard to find a new one for under $50, maybe $35 if you're lucky. At Babbitt's, though, big art books range in price from $6 to $15 (unless they're scarce or collectible, of course, but then we price 'em on the low end of used copies available through Amazon to ensure that you're always getting the best possible bargain). 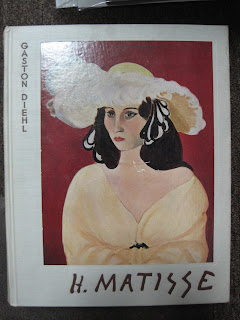 So it goes with the first book on this post. This 167-page book, filled to brimming with dozens of tipped-in plates, is only $8. What's a tipped-in plate, you ask? 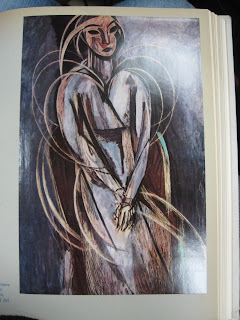 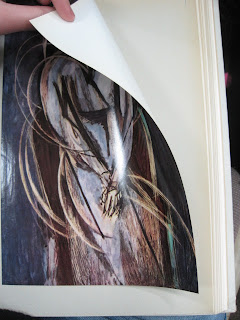 A tipped-in plate is an illustration that is loosely glued to the page along only one edge, so that it can be easily removed if one wants to frame it.


The book is authored by Gaston Diehl and was published by Editions Pierre Tisne in 1954. The text is in French, but even if you're not a Francophile, the beautifully reproduced illustrations alone make this book a worthy purchase. 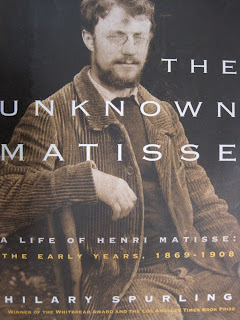 If you'd like a good biography of Matisse, we have both volumes of Hilary Spurling's A Life of Henri Matisse (2005), each in very good condition with dust jackets, each for $8. The first volume is called The Unknown Matisse: The Early Years, 1869-1908, the second Matisse the Master: The Conquest of Colour, 1909-1954. 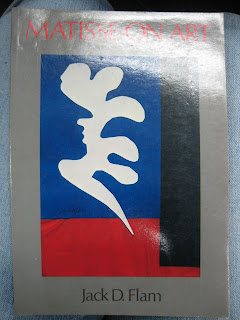 If you'd rather delve into Matisse's artistic philosophy, Jack D. Flam's Matisse on Art is perfect. Chapters include "Notes of a Painter, 1908", "Interview with Jacques Guenne, 1925", and "On Modernism and Tradition, 1935". Good stuff. 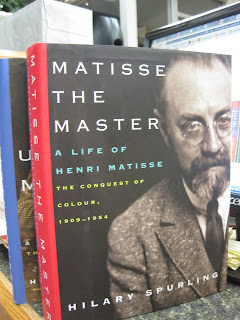 
"Knowing that I loved my books, he furnished me,
From mine own library with volumes that
I prize above my dukedom."


Babbitt's Books can furnish you and yours with at least four different sets of William Shakespeare's complete works. 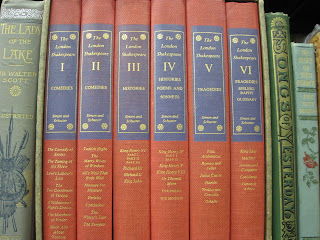 Here we have a $25 set in its original slipcase. The books are all in very good condition, and the only defect seems to be the previous owner's tiny, tiny ink stamp on the title pages of each book. This set would be a handsome addition to anyone's library. Case in point? We have it behind the counter with all of the fine bindings. 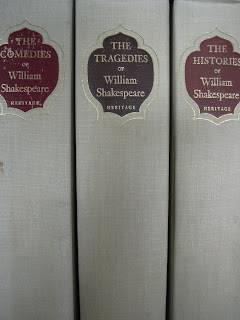 Next up is a 1958 set from The Heritage Press. There are three lovely, thick volumes with illustrations from Edward Ardizzone. Each volume is priced at $6 apiece, but we'll let you have the entire set for $15. You must act fast, though! 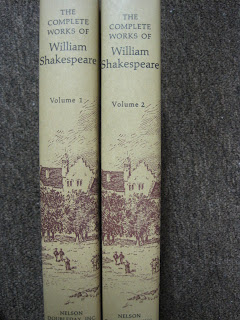 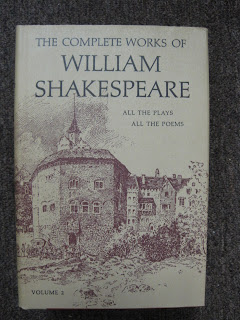 If you think your Shakespeare fan would prefer a set that takes up less space, this jacketed, '50s-era set will do nicely. It's just $8, too, which is roughly what you'll pay for a measly paperback of one Shakespeare play at one of the big-box bookstores. 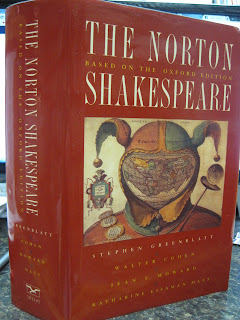 My personal favorite is The Norton Shakespeare. I have a copy of my own at home, which I used for Shakespeare courses at the University of Illinois. I like The Norton Shakespeare for its superior annotations. The right-hand margins are filled with synonyms for the archaic words, while more detailed information is confined to footnotes. The margin arrangement is good because you're not constantly glancing off the page when you read, as you'll do with an edition where the notes are on the opposite page. Each play or group of sonnets is prefaced by a six- or seven-page introduction to the text, which presents major themes and historical backgrounds.
The Norton Shakespeare also includes highlighted segments of text which represent material that was excised from certain editions / performances of Shakespeare's plays, either due to edits by Shakespeare himself (though bear in mind that his plays only came into print after he died) or due to corrupted transcription. If you find that last sentence confusing, you can read about the phenomenon of the bad quarto here. Like the Nelson Doubleday set, this book is only $8. It comes with a CD, which (apparently) contains a reading of A Midsummer Night's Dream and two sonnets.
And hey--if you can bear to hold these books back until tickets for the 2011 Illinois Shakespeare Fest tickets go on sale, your gift will pack twice the punch! 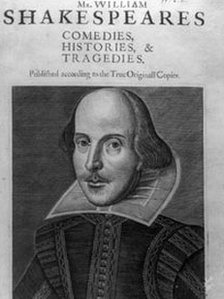 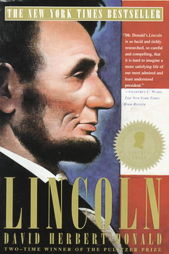 Donald was an eminent Lincoln scholar, and taught at several universities throughout his long career, including Oxford, Harvard and Princeton. He was the recipient of the Pulitzer Prize twice, so it will not surprise you to learn that Eric Foner (president of the American Historical Association!) called Lincoln the best biography of Abraham Lincoln in existence. 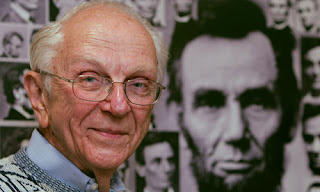 Our particular copy is signed on the title page by Donald. Both book and dust jacket are in as-new condition.


Other Lincoln books in our possession that will make good Christmas gifts are Mark E. Neely, Jr.'s The Insanity File: The Case of Mary Todd Lincoln (1993) and Allen C. Guelzo's Lincoln's Emancipation Proclamation: The End of Slavery in America (2004). Some scholars speculate that Mary Todd Lincoln, who was in and out of sanitariums her entire life, suffered from bipolar disorder. Three of her four sons died during her lifetime, which may have contributed to her depression and erratic behavior.


These three books, though, are only a small sample of our Lincoln collection. We have dozens of books in stock right now that discuss the 16th President's life and various aspects of his administration.

Come on by! Time is running out. (At least for Christmas shopping.) 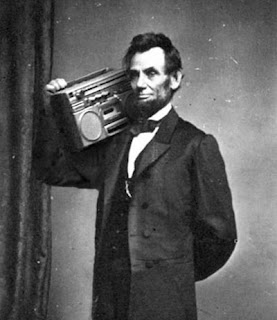 . . . Me Talk Pretty One Day and Dress Your Family in Corduroy and Denim by humorist David Sedaris. 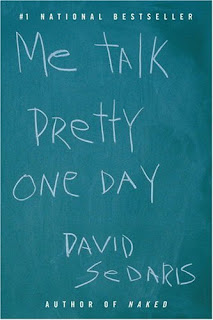 This blog entry would have come to you a day earlier, but when I took the books home for the night, I ended up reading 152 pages of Me Talk Pretty One Day in a single sitting instead of blogging! That's how good this book is. It's one of the quickest, smoothest, funniest reads out there.

All of the essays describe real events in Sedaris's life. The author begins the book with an essay about the semester he was forced to take a speech-therapy class with other lisping young boys. At the end of a class, Sedaris is no closer to pronouncing his s's correctly, and has decided that "a more appropriate marker [for the class's door] would have read FUTURE HOMOSEXUALS OF AMERICA." From this essay, he moves onto his short-lived guitar lessons with a real-life midget ("Giant Dreams, Midget Abilities"), an embarrassing foray into the coexistent world of art and crystal meth-amphetamine ("Twelve Moments in the Life of the Artist") and his sister Amy's fondness for dress-up, imitation, and a special fat suit ("A Shiner Like a Diamond"). 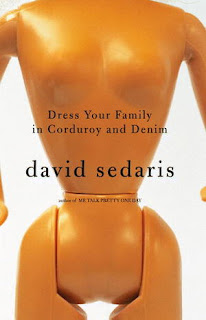 Dress Your Family in Corduroy and Denim, Sedaris's follow-up book, is just as good, and contains essays in the same vein. This time we get to hear about Sedaris's triumph during a childhood game of strip poker ("Full House"), the birth of his vulgar younger brother's first child ("Baby Einstein"), and the peculiar manner in which the Danish people celebrate Christmas ("Six to Eight Black Men").


Sedaris has visited Bloomington-Normal and Champaign-Urbana several times (I met him in 2007!) and makes regular appearances in the area. He will be in Waukegan, Illinois on April 6th, 2010 at the Genesee Theatre, and whoever you decide to give these books to can get them signed if they attend. 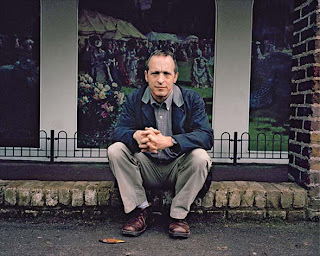 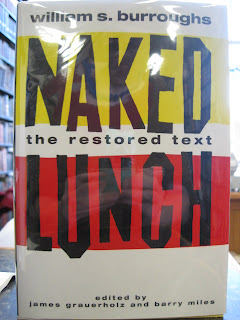 This semi-autobiographical novel is divided into chapters which, according to Burroughs himself, are only loosely related and therefore can be read in any order. Burroughs is the epitome of the Beat Generation, so you will encounter a lot of drug use (heroin, morphine, other opiates), sexual excess, and so-called obscene language within the book's pages. The book was banned in Boston in 1962 after some people complained that it violated obscenity statutes. It has been somewhat vindicated, though, as Time magazine rated it one of the "100 Best English-language Novels from 1923 to 2005".


1. He was openly gay, but had a common-law wife named Joan Vollmer, whom he accidentally shot to death during a drunken game of William Tell in 1951. He was deeply affected by her death, and cited it as the reason he became a writer.


2. He was good friends with Jack Kerouac and Allen Ginsberg.


4. He dabbled in Scientology and chaos magic, among other religions.


These facts only scratch the surface of the man, the character, the caricature who was William Burroughs. 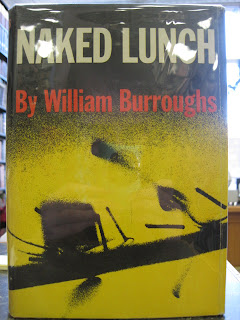 Burroughs is most popular, at least in our experience, with young men. It's easy to jump to conclusions about this marked preference, but more likely than not, they just want a vicarious taste of the fast-paced, mixed-up life that Burroughs led. Burroughs is also popular with folks who like Kurt Vonnegut, Jack Kerouac and Hunter S. Thompson, so if your young man (or woman) likes these authors, there's a good chance he (she) will enjoy Naked Lunch. Don't be scared off by this book's popularity with the 18-25 crowd, either, because it also has an audience with the baby-boomer generation. All your gift recipient really needs is an open mind and an appreciation for good literature. 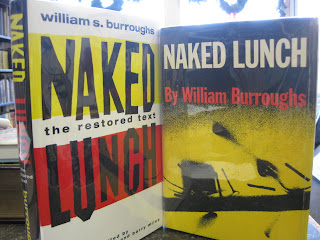